Our next port of call, after Cobh, was Dublin. I had high expectations, maybe too high. I knew I would have to settle for just a few sights and, of course, it was raining. More like pouring really, so we had a lot of wet, soggy ground to cover in just a few hours!

As we pulled into port it was obvious that the skies were not going to clear anytime soon. 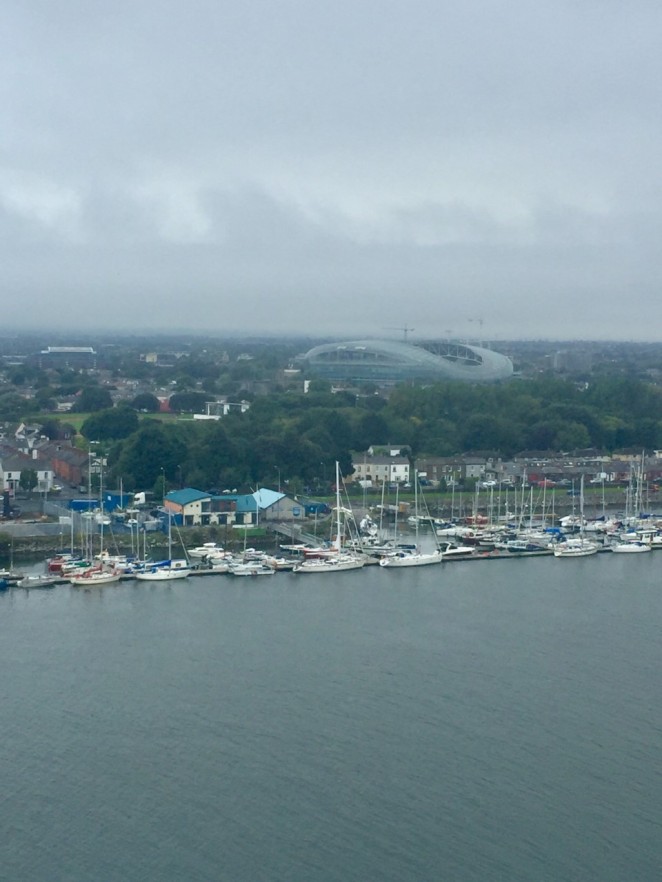 we could make out the new soccer stadium in the gloom

Our shuttle bus dropped us in the downtown area and we set out on foot for Trinity College, Ireland’s oldest university founded in 1592. It is also the home of the Book of Kells. Now, I am not a religious person but this collection was penned in 384 AD, and I am a person who greatly values the written word and was hoping to see this exhibit. So we started off toward the college. 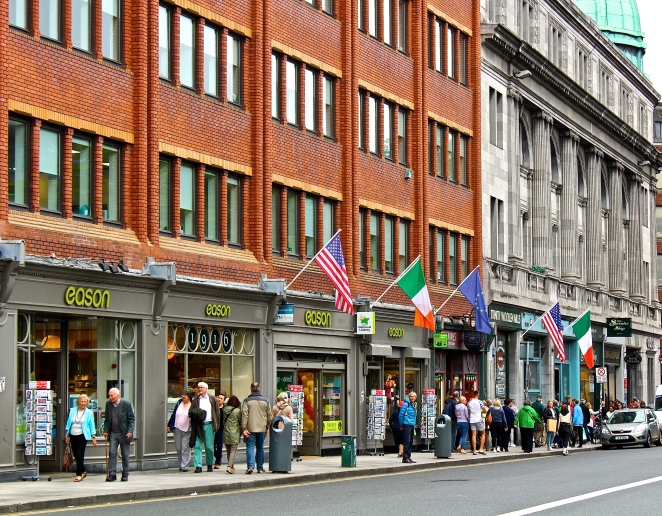 Sights along the way

Trinity College was beautiful. I tried to get a few shots of the campus as we wandered around in the rain. 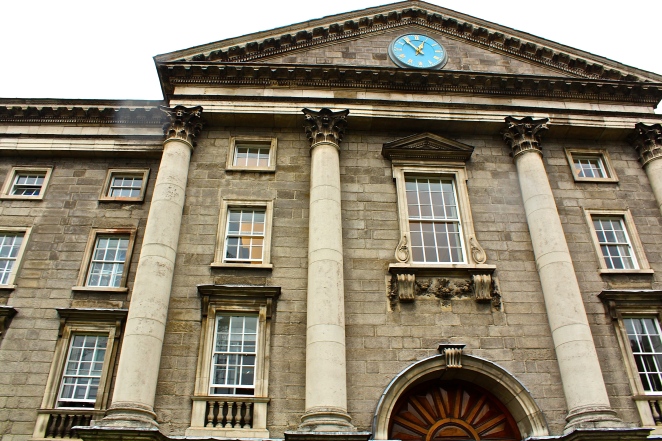 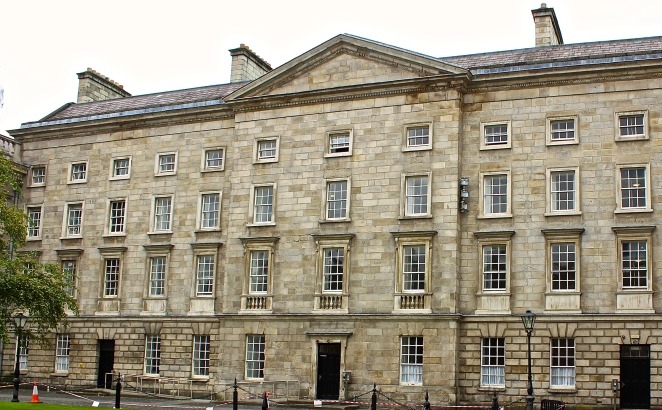 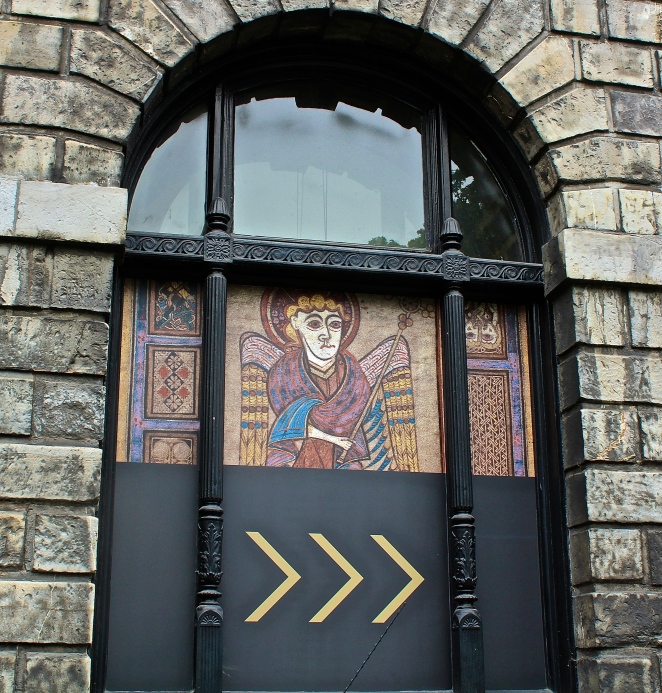 Unfortunately, the line was long and the rain was steady so the decision was made to move onto sight number two. The next stop on our walking tour was The Dublin Castle and we pointed ourselves in that direction. Along the way there were some beautiful sights lining the path. 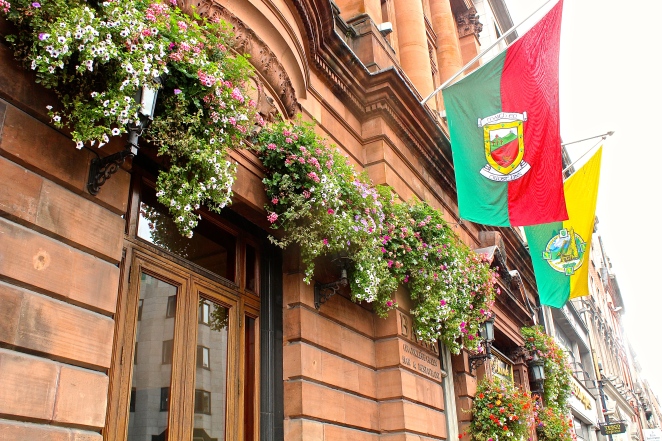 We ducked into a bakery and I snapped a few shots of the local yummies! 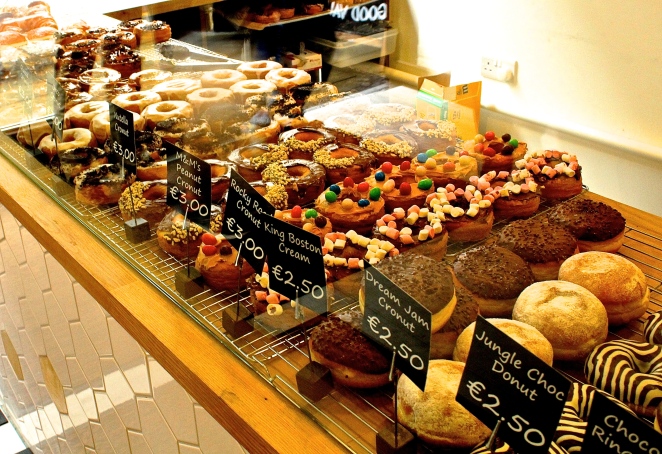 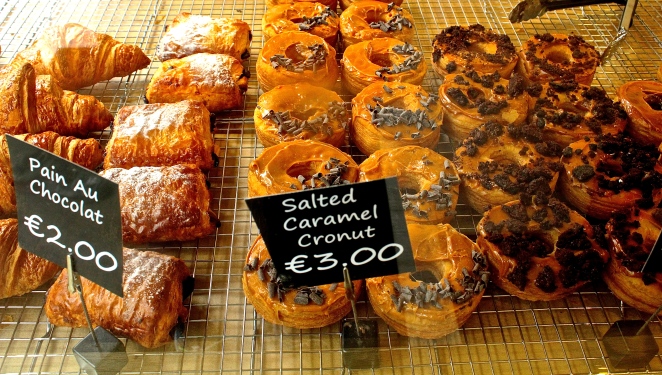 We saw this building titled: Sick & Indicent Roomkeepers Society. What is this about?? Glad I wasn’t alive in 1790 AD!

As we rounded the corner we saw The Dublin Castle. It was built in the 13th century on a Viking settlement and used primarily by the British until 1922 when the Irish Government took over. What is really cool is that it is a working building that is used for state functions and houses governmental bodies.

The inside foyer was studded with sculptures. 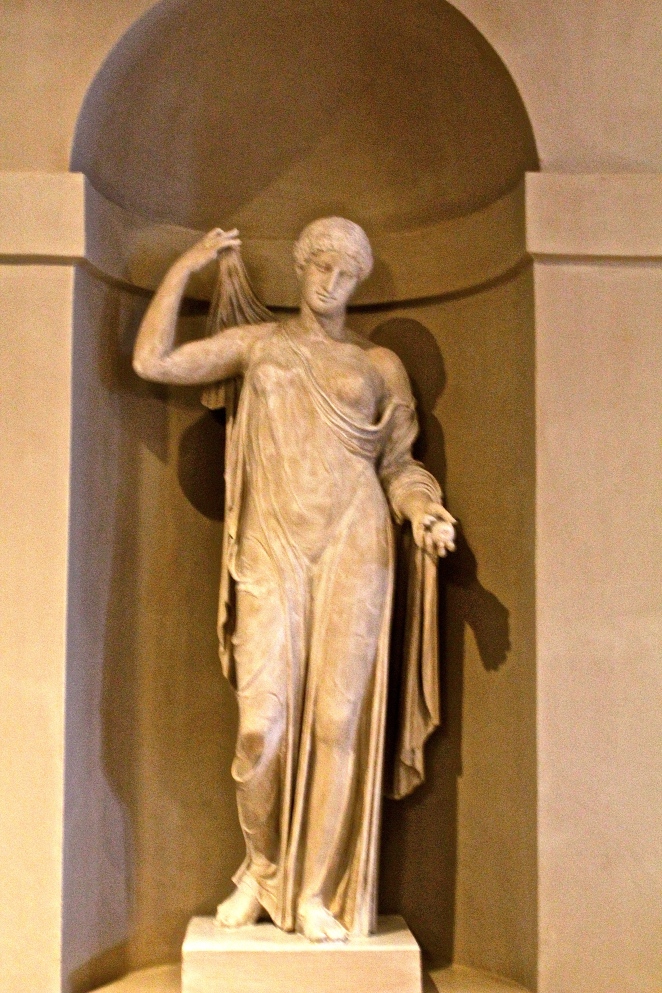 Many politicians have posed in front of this area.

A portion of the tour included this gorgeous hallway. 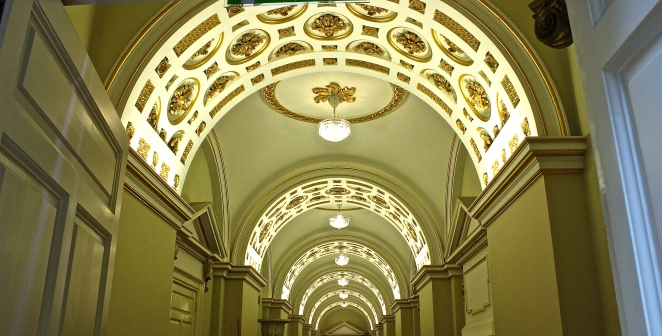 One room off the hallway contained these amazing books which have been painstakingly restored. I may not have made it into the Book of Kells but I was thrilled to see this display. 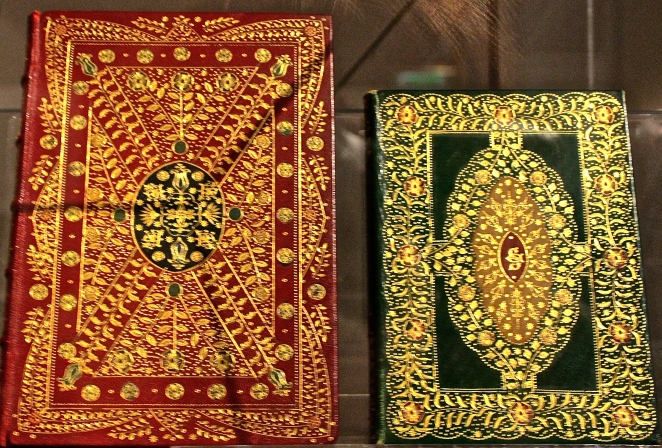 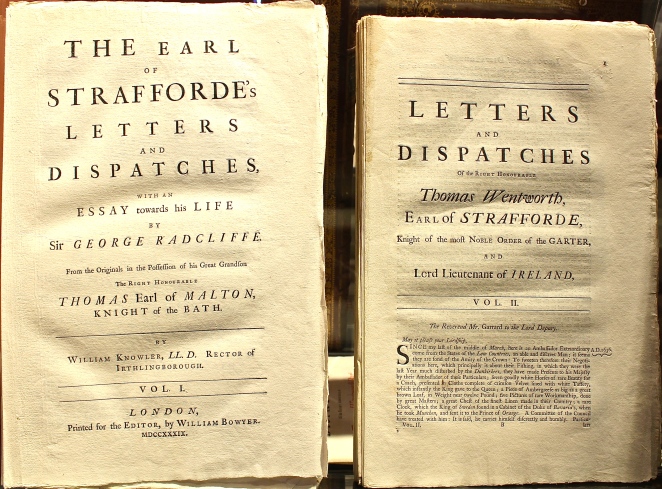 Another room off that same hallway was this spectacular red room that routinely holds state functions. 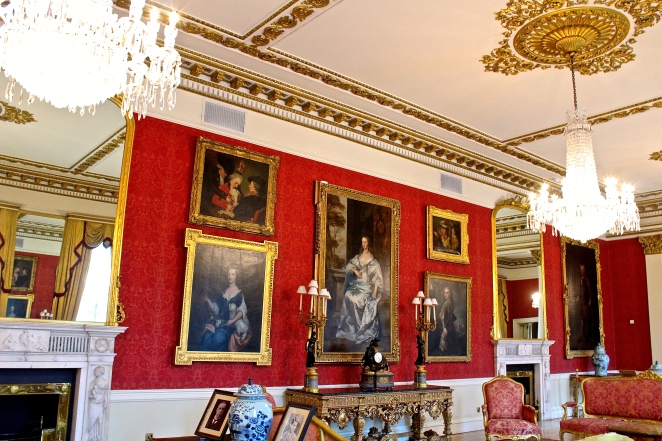 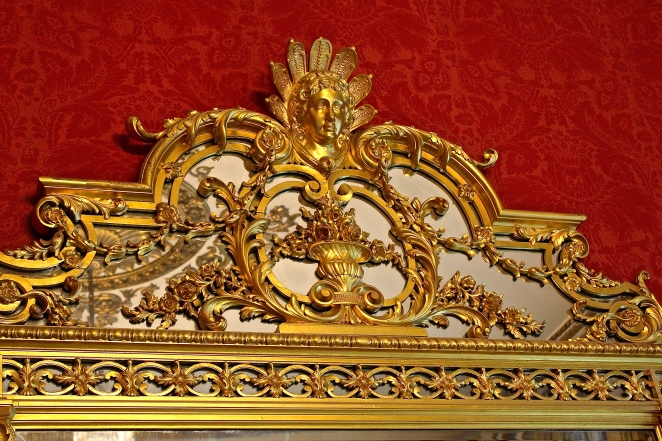 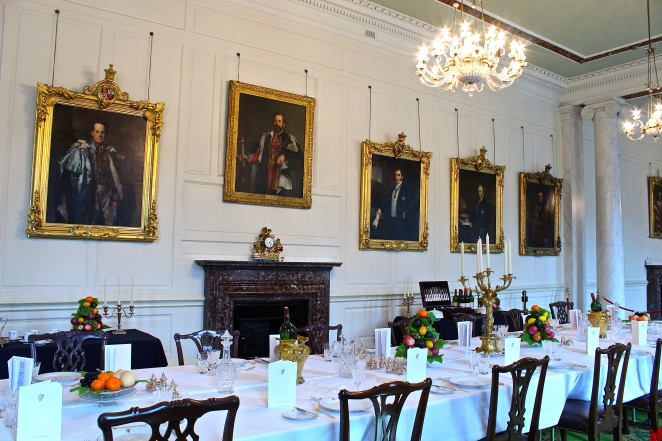 By now we were hungry and a little tired from all this walking around. We went out into the street to search for a pub and dry off a bit from the rain.

We found The Bankers Lounge, which was adorable. In fact I loved the mural on the wall so much that I used it to log our run on Instagram.

All four of us had the lamb stew with black bread. It was amazing, and I don’t like lamb! Maybe I just needed an Irishman to prepare it for me!

This was a great way to wrap up our Dublin experience. We next moved onto Belfast, home of the Titanic museum. Our cruise ship sailed for Northern Ireland while we slept and we woke up to this view!

We boarded another shuttle bus and were, once again, dropped in the middle of the downtown area. This time, no rain! Once again we set out on foot to find the Titanic Museum. We started down the street and I took a few shots along the way.

There was a McDonlad’s and a KFC everywhere!

I thought this clock tower was gorgeous!

The Titanic Museum was pretty easy to spot! The outside of the this massive building is shaped like the bow of a ship, stunning!

I was looking back toward our cruise ship which was across the water. It was a little eerie spending the better part of the day studying the demise of the Titanic then heading back to our cruise ship!

I did not take a lot of photos in the museum as it was dark and a very interactive exhibit. There were holograms, an Imax movie, a 3D experience room that took you on a tour of the ship and even a ride in the building! I really do recommend this museum as it was like no other I have ever been to, it was truly unique! There were a couple images that stood out and I did try to capture some of them. 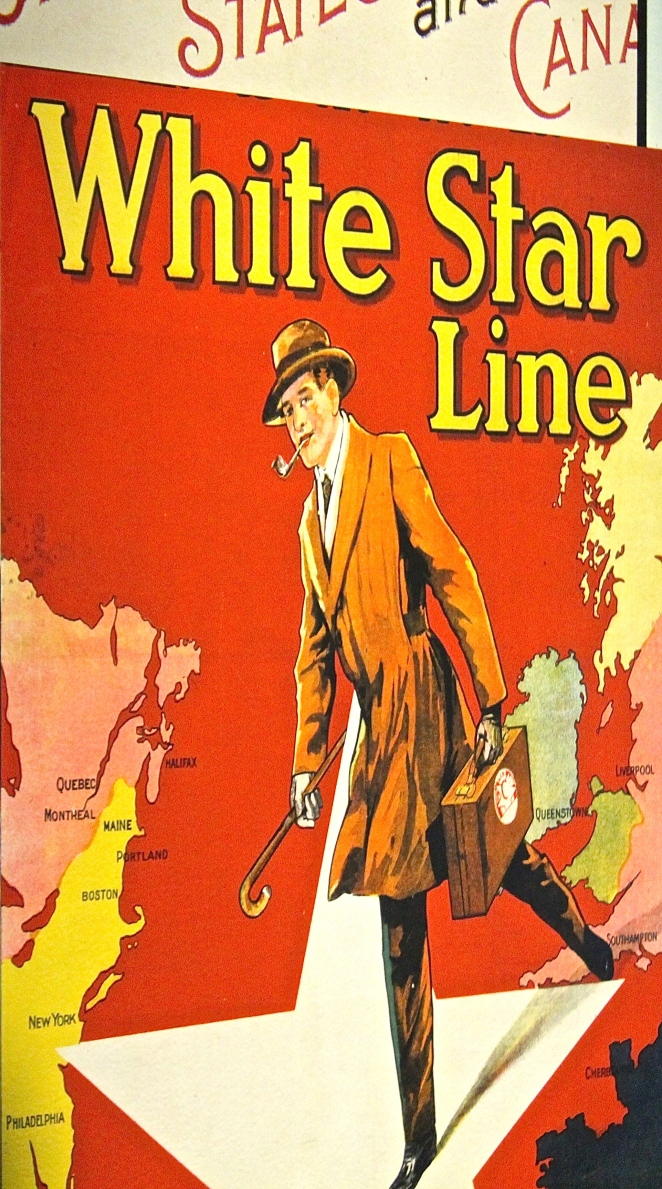 This was a poster from that era advertising for the ill fated cruise line.

There were several exhibits illustrating the accommodations for the different classes on board. Below is the third class cabin complete with holograms and a recording playing a hypothetical conversation between these two girls. They spoke of how excited they were to be going to New York.

This map showed the voyage of the Titanic as it sailed from its construction site in Belfast to Southampton where the passengers embarked, then travelled to Queenstown (now know as Cobh, Ireland) to pick up the last of the passengers, her last port of call before the tragedy. It really struck me, when I viewed this map, how closely my trip was mirroring the Titanic’s itinerary.

These final images of the museum were the slow sinking of the massive ship as Celine Dion sang her famous ballad from the Titanic movie (you knew that had to be in there somewhere).

We safely made our way back to our own ship and said good bye to Ireland. There is so much more I would like to see and do here, I will definitely be heading back in the future!

Our next port of call will be Greenock, Scotland and there may be some whisky involved!