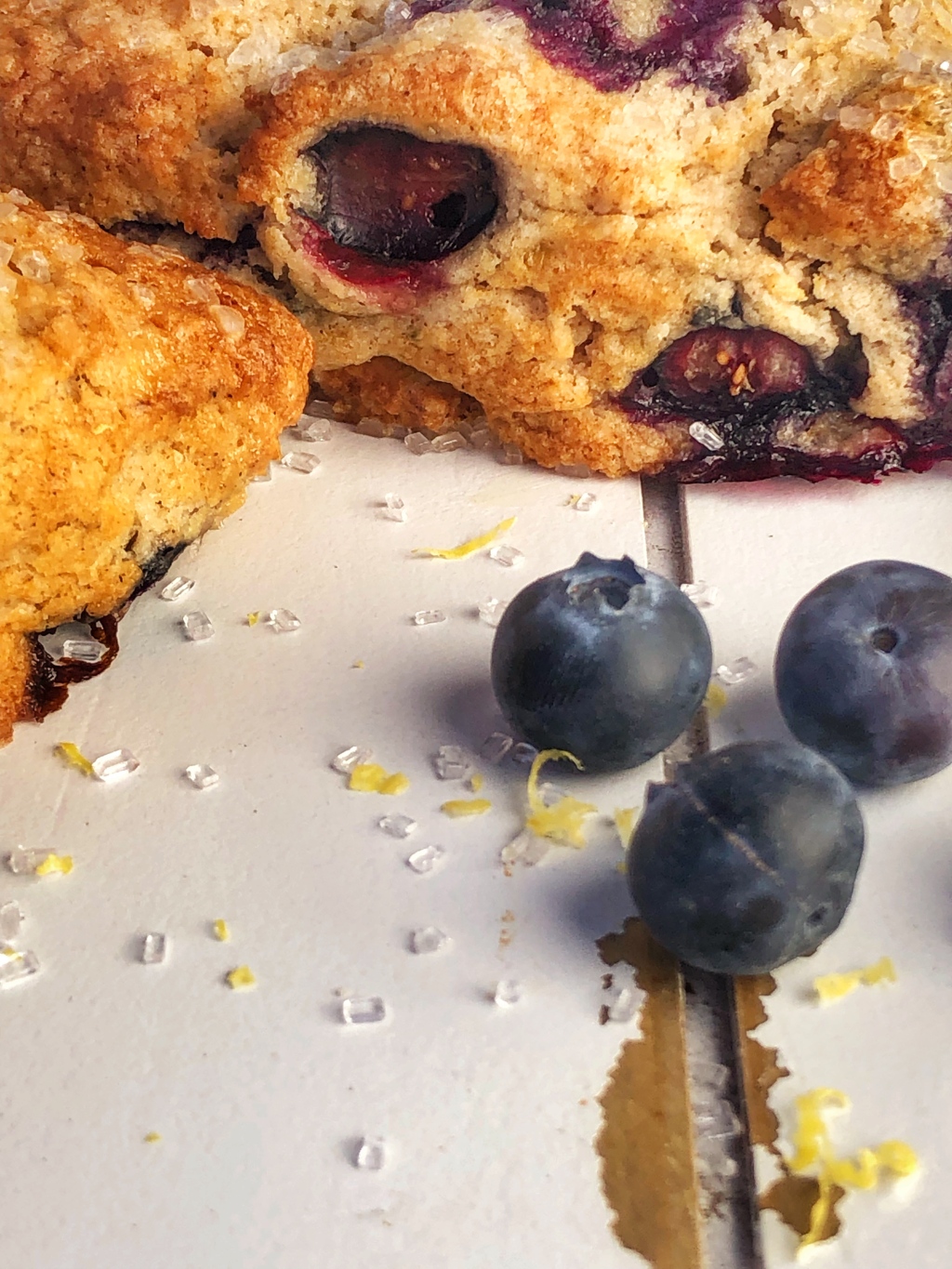 When I saw that Sally had set scone baking as the May challenge, I was both excited and disappointed at the the same time. Excited because I love scones! And so does my family, which means I have baked a lot of scones over the years. I don’t find them to be that difficult, mainly due to all the practice I have had 😂

So I was not expecting this to be much of a challenge. But then I took a closer look at Sally’s recipe. Her method of cutting in the butter (a crucial component to scone baking) was one that I have seen before, but have never tried. More on that later!

The first task was to choose which flavor to make my scones. Sally has quite a large variety from which to select! She has savory recipes as well as the more common, sweet options. We were having house guests this month, so I selected the tried and true, blueberry, which would please all of us for breakfast during their stay.

The first step was to combine the dry ingredients: flour, salt, baking powder, cinnamon and sugar.

Then I chose to mix the wet ingredients and keep it in the fridge, while I cut in the butter. Keeping everything as cold as possible, for as long as possible is crucial to getting fluffy and light scones. Not an easy job in a hot Tucson kitchen 😆

I mixed the heavy cream, vanilla and egg in a 2 cup measure with a spout. I added another ingredient, not specified by Sally’s recipe: Lemon zest 🍋 I love lemon and blueberries together, so you will see the zest in the picture.

This was whisked up, and placed in the refrigerator for later.

Now comes the new part, for me anyway. Normally, I will cube the cold butter into smallish pieces and use a pastry cutter to work the small cubes into smaller, pea sized pieces. And, that has always worked well! But Sally, and others that I have seen, will use frozen butter and a box grater. 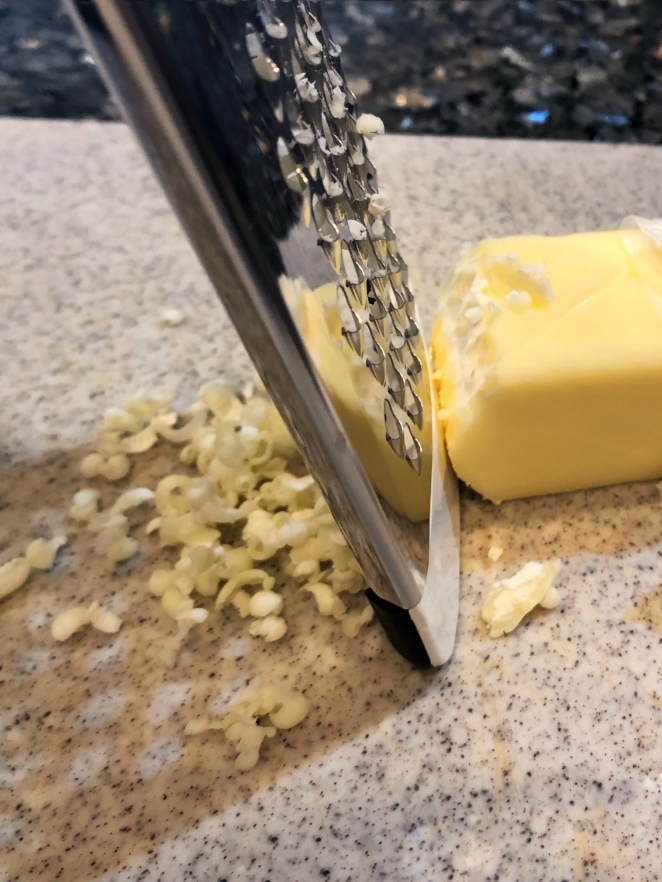 I admit that this has always struck me as messy and time consuming. And, if you are making more than just 8 scones, it is a lot of butter to deal with! In this recipe, there is only 1/2 cup, or 1 stick. So I decided to give it a go. 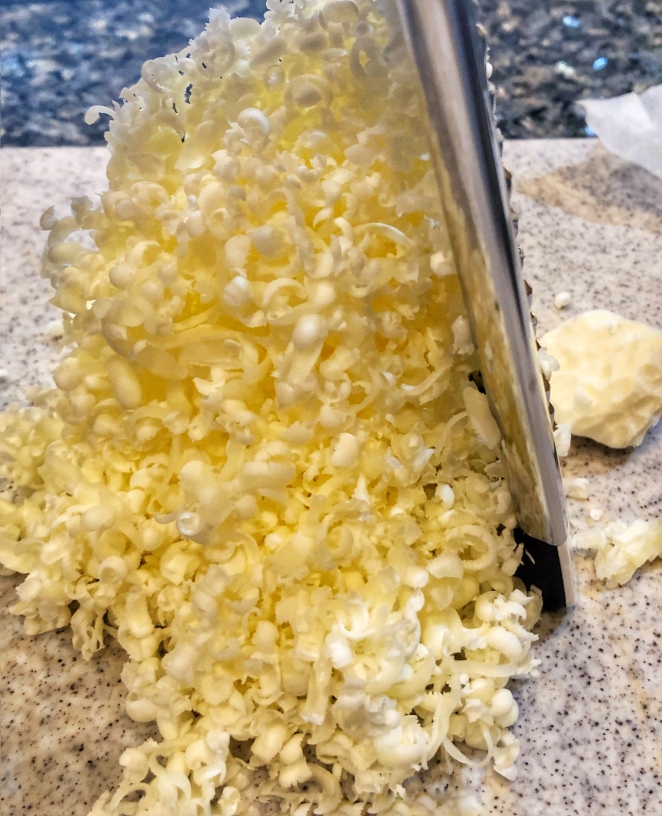 This was added to the dry ingredients and cut into the mix, which did not take long given how small the butter pieces were from the grating process. 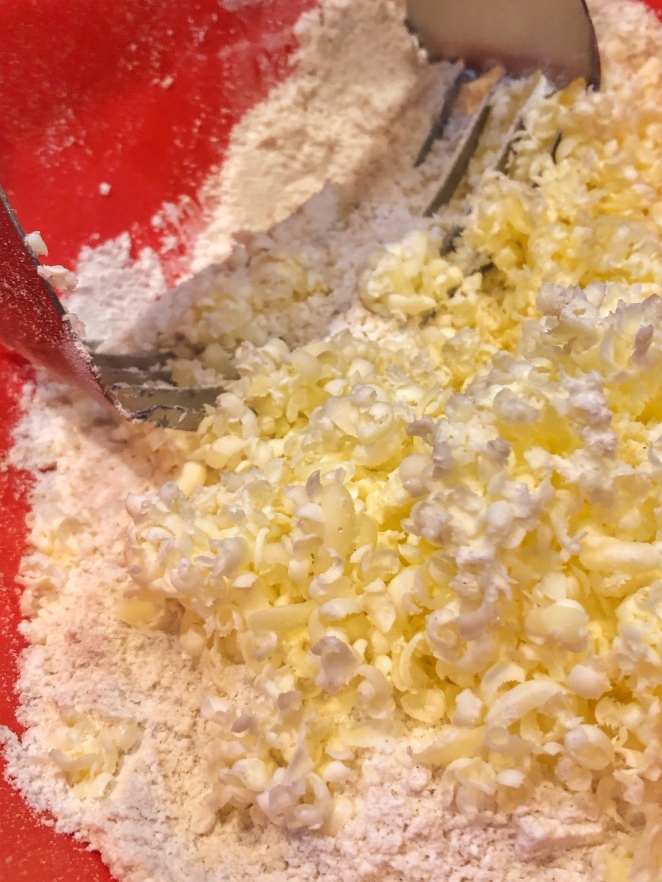 The cold, wet mixture was then added.. 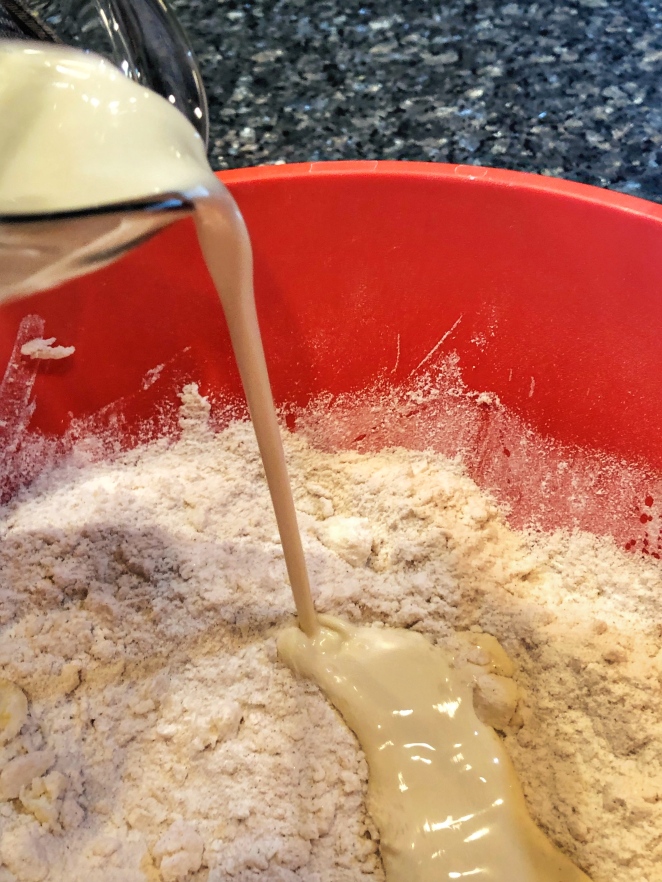 as were the blueberries.

The batter was stirred until the components came together in a loose ball. This was turned out onto a heavily floured counter, and molded into an 8″ circle. As I mentioned before, this was cut into 8 triangles. 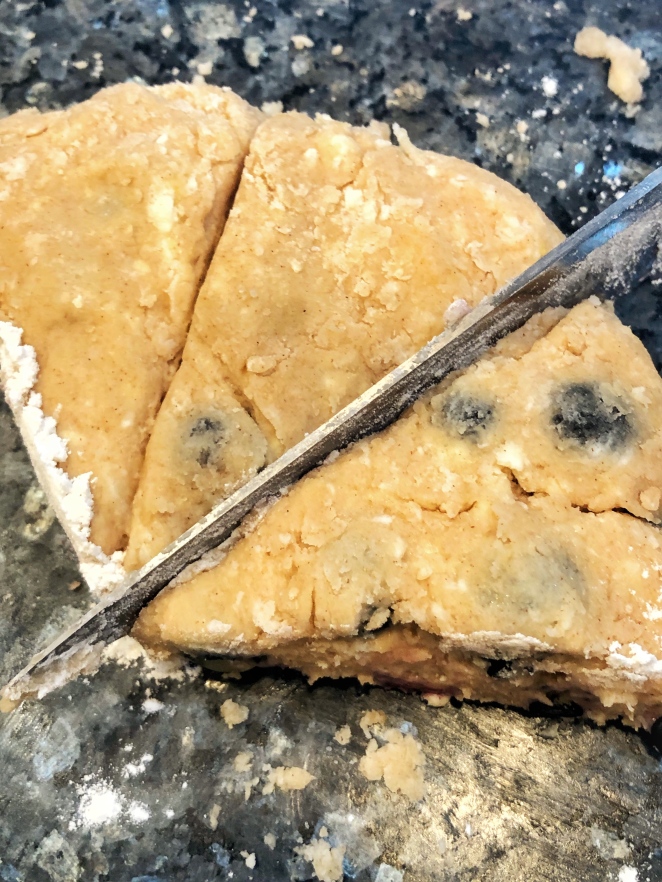 I put these on a tray and left them overnight in the fridge, as I wanted to bake them off, fresh in the morning, for our guests.

The next morning, the scones were brushed with cream and dusted with course sugar. They were baked at 400F for some amount of time (I forgot to set the timer 😉)

Then it was time to chow down! 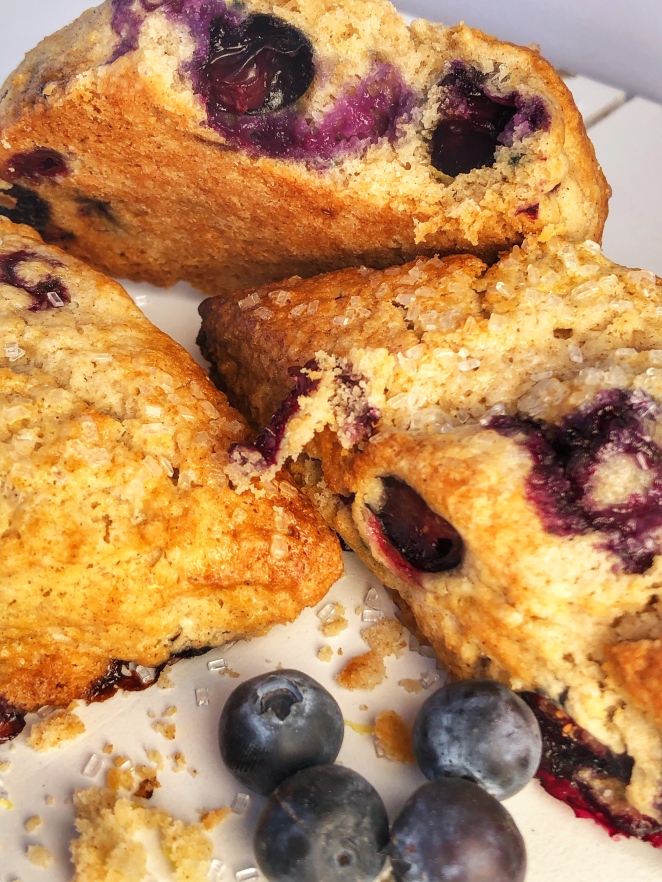 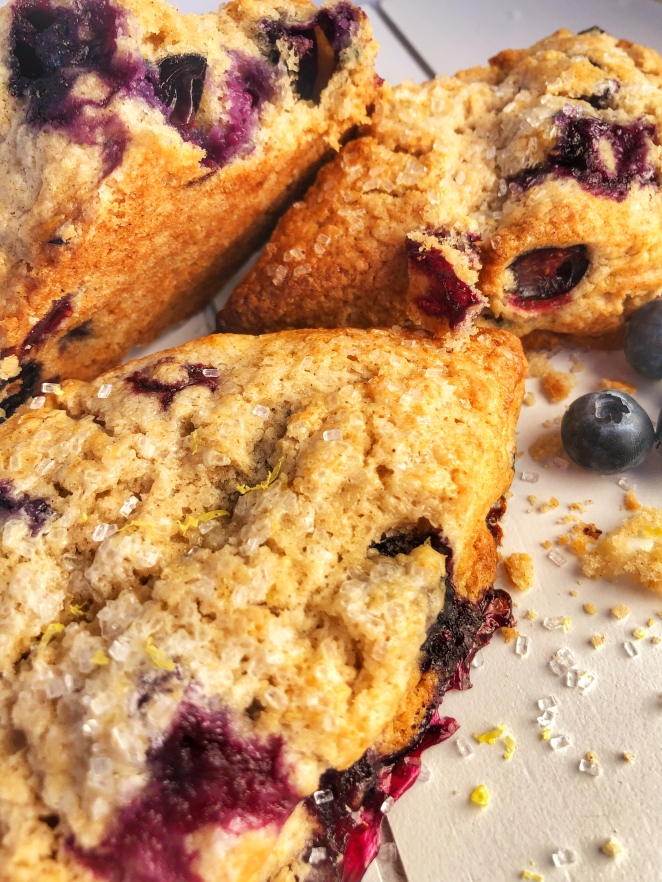 So, was it really necessary to grate the butter?

These scones were delicious! No doubt about it! But they were just as tasty as recipes where I just cut up the butter into very small cubes. I would say, if there is a small amount of butter needed, then grating would be fine. But for those recipes where you are making more than just 8 or 12 scones, and you like to cube the butter, then go right ahead. That will be my plan moving forward.

Learning to truly try hard by committing to each move and hold has been vital to my progress. Both forerunning during route setting and tension boarding have taught me this skill. I found myself often making a move, getting to the hold, but not latching it. Finding the grit to fully commit to a move, even when it's uncomfortable, can make or break the send.⁠
🏆Are you ready to learn everything you need to get started with hangboarding and developing your strength?⁣
Dancing along the edge of the flatirons 🤪 ⁠
Having lingering projects makes you excited to go back and try them again. Long term projects are something that I've never really had before. Usually I have a problem that I could probably get within a couple of sessions and then I would move onto the next thing. This is the first time where I've spent multiple sessions on something and I can't wait to go back.⁠
Elevate your sunscreen game with total protection from Dermatone. | #SeeYouOutside #DermatoneSkinProtection⁠
The best part of climbing is when it all clicks and gravity ceases to exist⁠
Loading Comments...
Comment
×