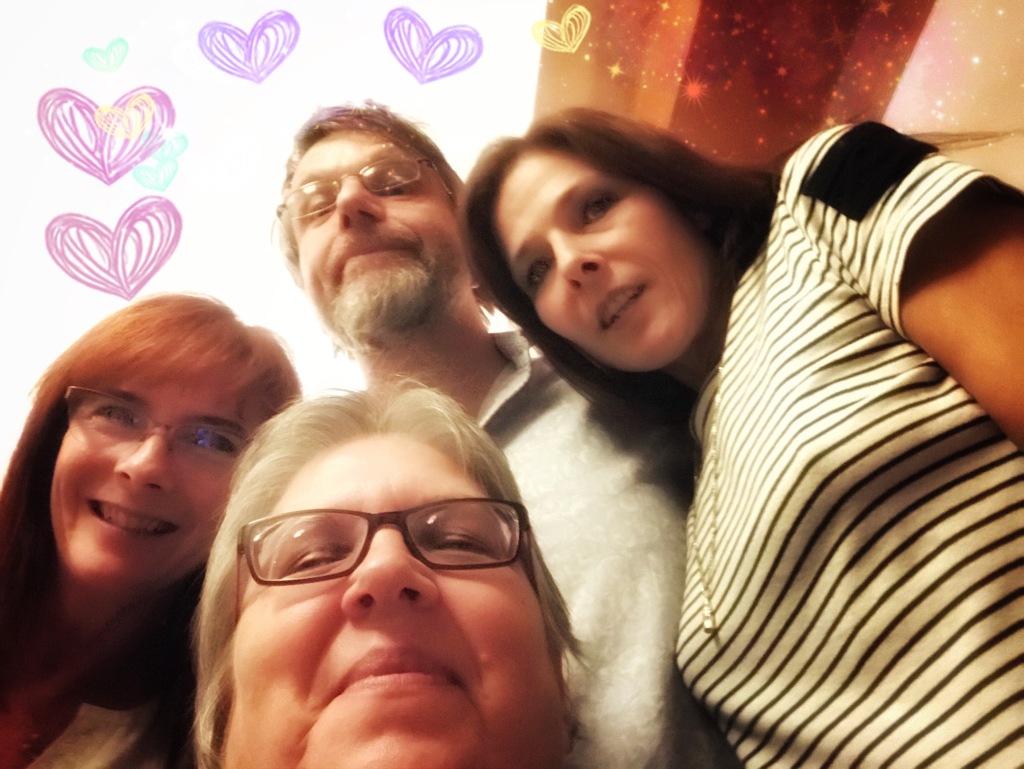 It has been almost one month since I went to Montreal to meet up with some of my BBBs (best blog buddies). Why has it taken me so long to blog about the trip? Is it because I had a rotten time? NO!! Is it because we didn’t do anything fun? NO!!! Is it because I took so many pictures of all the places we visited that I could not figure out how to start this post? BINGO😊

I was only there for three days, so how could I have a billion photos? I think this phenomenon has something to do with getting bloggers together. As individuals we tend to take more pics than the average human, but combine us! I can’t begin to imagine how many storage sticks Darren had to buy for his 10 day trip🤣 Not only was this my first time meeting Darren, Dominique, Linda and Bill, it was my first trip to Montreal. Another reason for my snap happy camera finger.

I decided that the best way to approach this retelling of the first annual BBB meeting, would be chronologically, and in two posts. Is my boring science background coming through loud and clear? 😂

I flew in on Tuesday, about 3 hours late (thank you Air Canada). Darren and Dominique waited to have dinner with me! I felt so bad for starving them all day. We had a lovely dinner, not that the food was scrumptious, it wasn’t. But, meeting these two wonderful souls was a blast! I could tell this was going to be a fun trip😊!  It was getting late, so we called it a night and wound are way through the maze of construction that is downtown Montreal. Seriously, every street was in some state of reconfiguration! 😳

Dominique chose the perfect hotel for our stay, the Hotel Terrasse Royale (not my photo!). As she put it, it is clean, comfortable, affordable and central to everything. She was right on all counts! 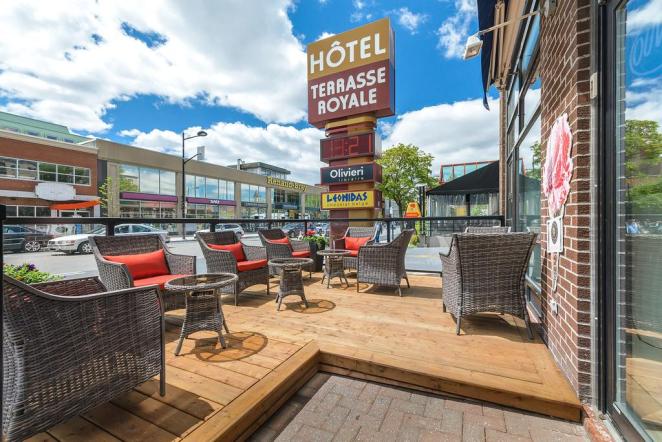 I would definitely stay here again and recommend it to everyone.

There was one more surprise when I checked in.

As if being the best host in all of North America was not enough for her, she and Darren put together a gift basket for me❤️ This would be very important in a couple days!

The next morning, I was still on West Coast time, so I was up kinda early. I needed coffee so I ate at the hotel restaurant. Of course, being a food blogger too, I wanted to capture my gorgeous and tasty breakfast!

This oatmeal with fresh fruit was so good, I had it the second morning as well.😋 I did my morning yoga and met Darren at the pastry shop across the street, for more coffee! ☕️☕️Montreal is so much like Paris! I couldn’t resist taking some photos of the breads and pastries. 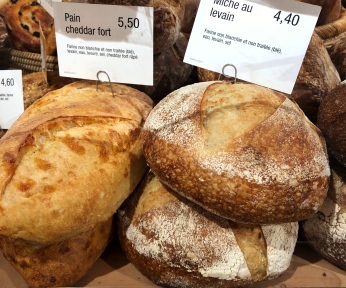 I didn’t sample any, but did have a fantastic cappuccino (or two 😉)

Wednesday was to be our Botanical Garden day🌳 so off we went to Le Jardin Botanique de Montreal.

I did not take this picture, I swiped it from the internet. I like it for a couple reasons. Firstly, the garden was presenting their Chinese Lantern Exhibit, and some of that is depicted here. Secondly, see that tower in the background? I was in love with this structure! I believe Dominique told us that it was part of a venue built for the Montreal Olympic village.

We began our tour inside, with the tropical flowers and plants. You can imagine how many pictures Darren, The Arty Plantsman, took😆 He was a botanist/blogger/photographer on a mission!

As he is far more talented at plant photography, I will only share a couple of shoots and blooms that caught my eye. See Darren’s post for the real good pics!🌸 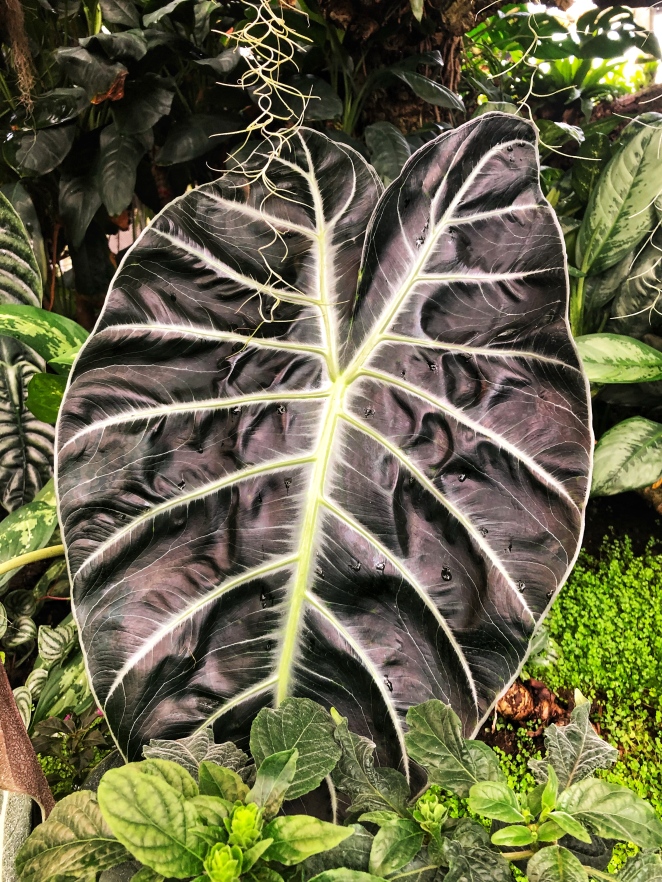 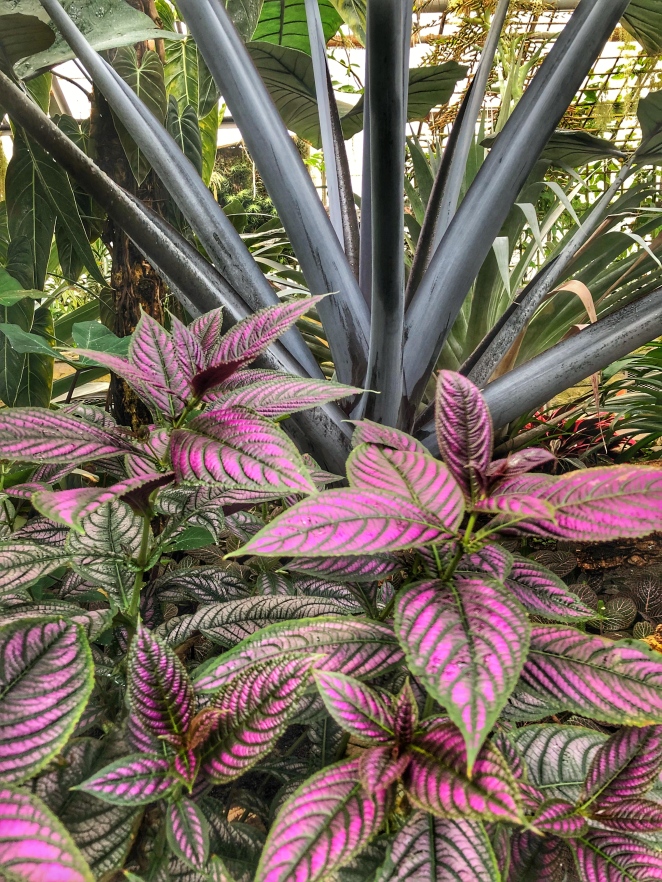 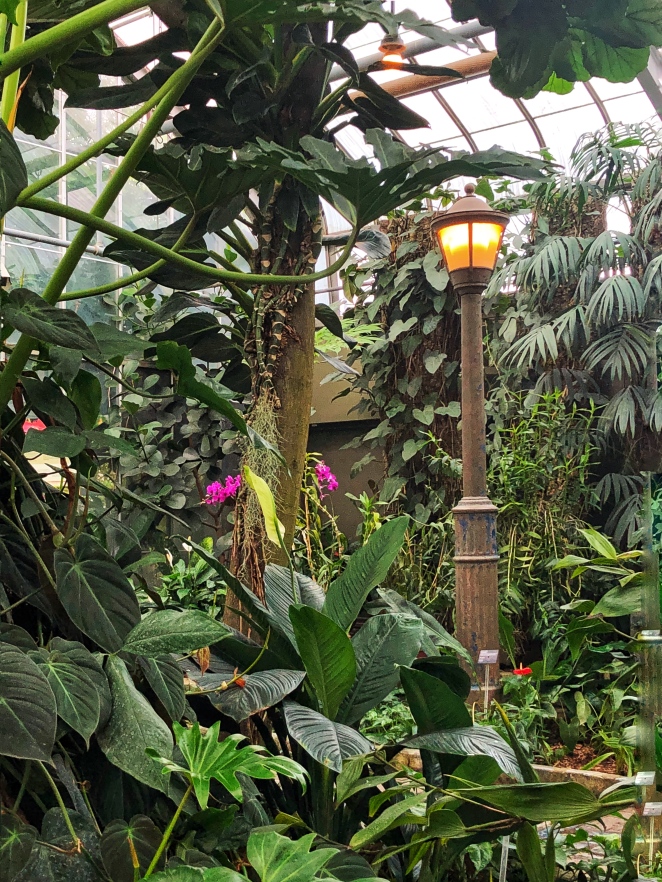 This waterfall was located at the end of the pathway. I took a couple long exposure shots from the front…. 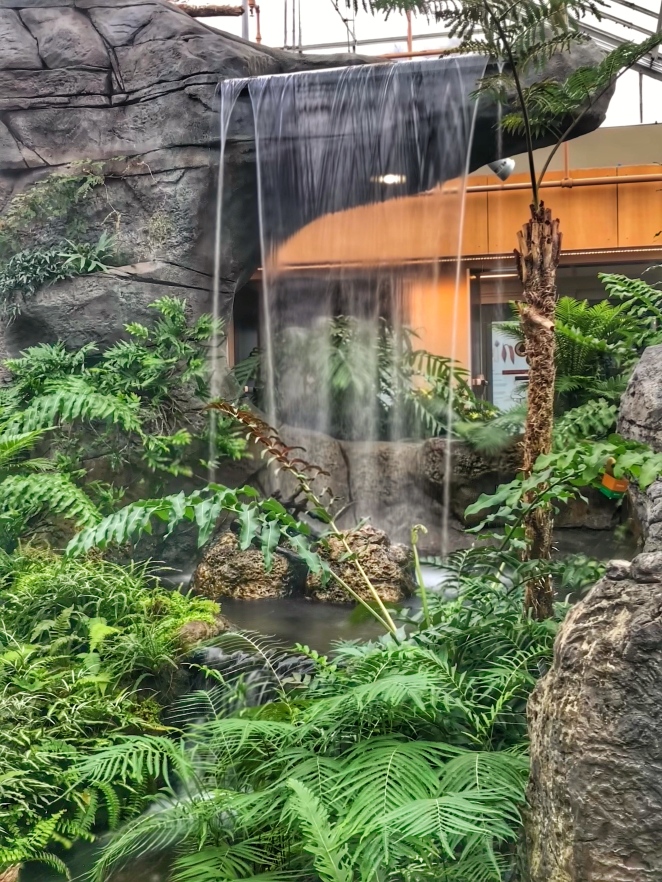 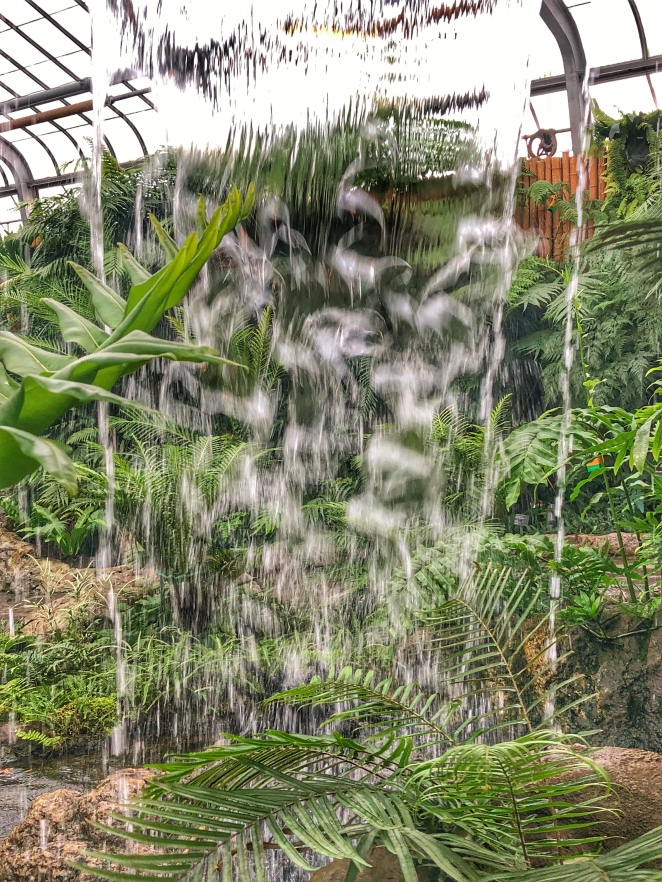 The ceiling of the inner building had these beautiful botanical drawings.

I could totally envision Darren’s artwork hanging up here one day 💕!

Eventually, we made our way outside!

I loved the reflection in this shallow pool

the one dark berry caught my eye

This picture just says “fall” to me and made me think of Lisa! She could do so much with this💚

There were a few critters out too! I did my best to channel my inner Roda, who along with Lisa, we missed on this trip😞 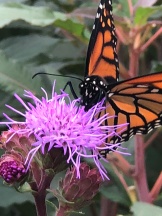 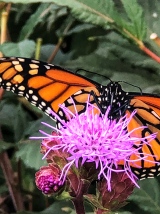 And speaking of Roda, I can’t see a sunflower, without picturing her! Anyone else remember that post of her carrying 300 pounds of sunflower heads?🌻

There were some structures in the garden as well.

Dominique took this picture of me, as Darren took a picture of her. I haven’t seen it yet! Dom does pretty well behind the camera too. Not just a a model my friends!

Of course, while I am taking these pictures, Darren is capturing images of flowers the size of a pea and Dom is on her second wardrobe change! I can’t wait to see how those shots turned out😊!

We continued meandering our way through the Chinese lantern display.

I am determined to get this Silver Chinese Grass in one of my yards, maybe both of them!

Another view of my favorite structure in Montreal! 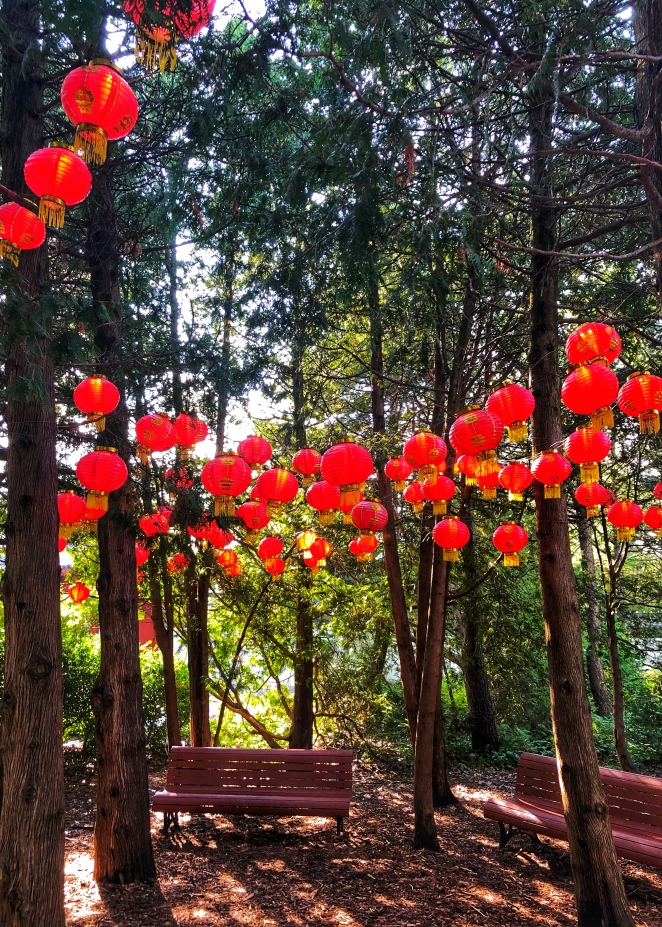 A beautiful bench for a cup of coffee ☕️

One of the rare moments when Darren isn’t smiling! He is deep in thought, looking for his next shot 💕

We posed in the corn for one last picture! We had a great time, but needed nutrients, well, caffeine! Darren and I opted for, yet another, cup of coffee and Dom would have passed out if she didn’t have that Diet Coke in the car 😂 it was hot and flat but she downed it like a pro! 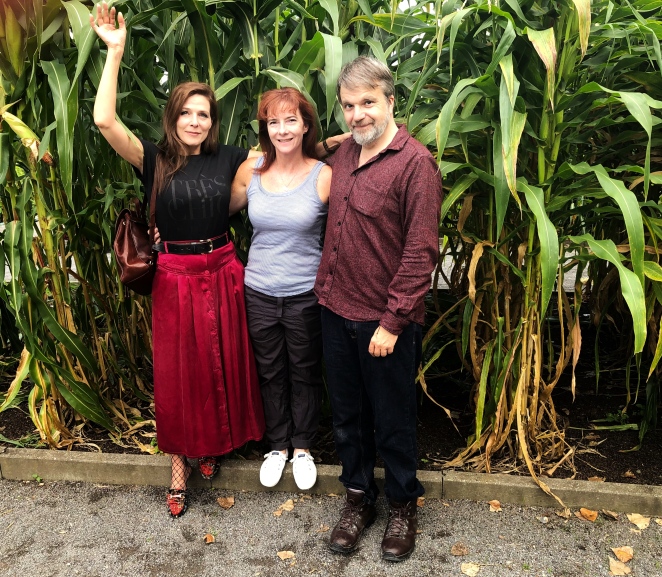 What a doof I am! Look at these two European gems and I am the dopey American with the white shoes on! I have got to read Dom’s blog more often🤣🤣😂

Off we went to an Indian Restaurant, my first! I have no idea what I ate that night as Darren ordered for me (thank God!). It was delicious!! Seriously, I will have to try that again, whatever it was 😋. I slept well that night, after all that walking and laughing😂 Little did we know that our trip to Mount Tremblant the next day would require even more effort 🏔.

I will save that story for the next post, but let me just warn you…..Dominique almost didn’t make it off the mountain. 😱!

You may be asking “where was Linda and Bill”? They won’t be in Montreal for another day, but they should have started driving by now😉💕