Sally threw down her toughest challenge yet when she went for laminated dough! I have talked about my feelings for laminated dough a few times already. You may remember that I had to make this many times in culinary school and had no desire to revisit those days!

But I have a tough time turning down a challenge! And, Sally has a novel approach to making laminated dough. There are more steps that require longer refrigeration times, but they are quite easy! Check out her site first, she has wonderful videos and tips to help along the way!

We begin by making the dough, which is straight forward. 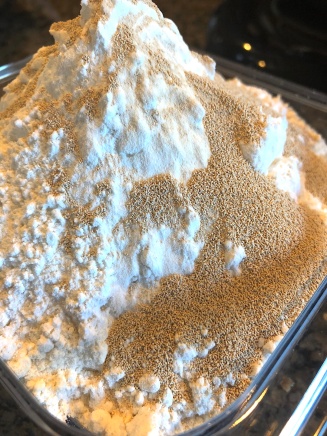 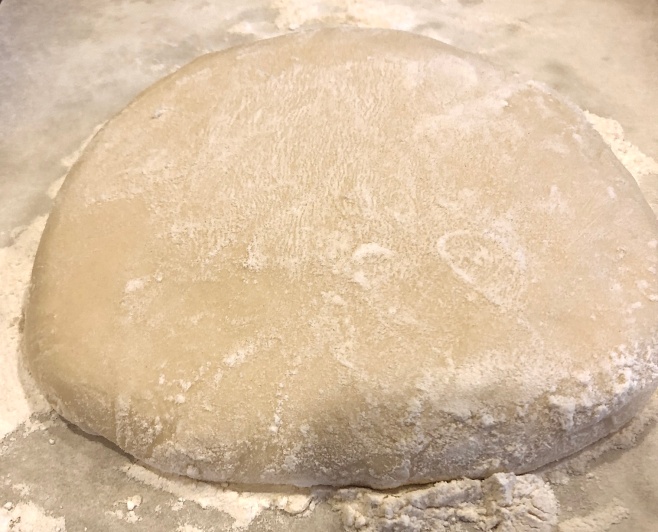 Butter, flour, sugar, salt, yeast and milk were combined. The dough was kneaded in the mixer and rested, in the refrigerator, for 30 minutes. This allowed the gluten to relax so it could be rolled out in the next step. 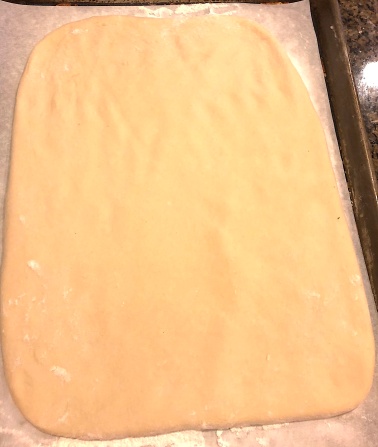 The measurements from here on are important. The goal is to encase the butter layer completely within the dough. So, I had to take my time to make sure that this rectangle was exactly 14 in X 10 in. Use your hands, a rolling pin, a measuring stick and lots of flour!

Once the rectangle was the correct size, and the corners were squared off, the dough was ready for its first long rest. The directions were to rest for 4 hours or overnight. I chose to leave this, covered, in the fridge until the next morning.

The next day I made the butter layer.

Three sticks of room temperature butter, and 2 tablespoons of flour, were thoroughly combined. The butter layer was spread onto a parchment paper in the precise measurements of 7 in. X 10 in. This smaller rectangle was cooled in the refrigerator for 30 minutes, until solid. It is important that the butter be cold!

After 30 minutes, the butter layer was laid in the center of the cold dough layer from the day before.

The dough was folded over the butter, completely encasing the butter layer. The dough has now been “laminated”.

Make sure the dough is pinched tight around the butter so that the butter will not ooze out of the edges when it is rolled out in the next series of steps!

The dough was rolled out to 10 in X 20 in this time. When this dimension was achieved it was time to fold the dough. Fold the top third down, then the bottom third up, until you have a smaller rectangle, like the one at the bottom right. That is the “first turn”. You will do this twice more, for a total of three turns. This is what makes the layers of flaky pastry! 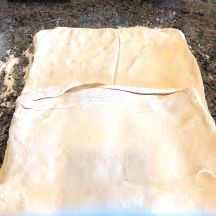 If the dough is too warm then refrigerate for 30 minutes in between each turn. In my kitchen, I was able to do two turns and then had to cool the dough for 30 minutes before finishing the third, and final, roll out.

The dough needs to rest again for 4 hours or overnight. Since I did this in the morning, my dough rested for 5 hours before I finished baking the croissants later that evening. 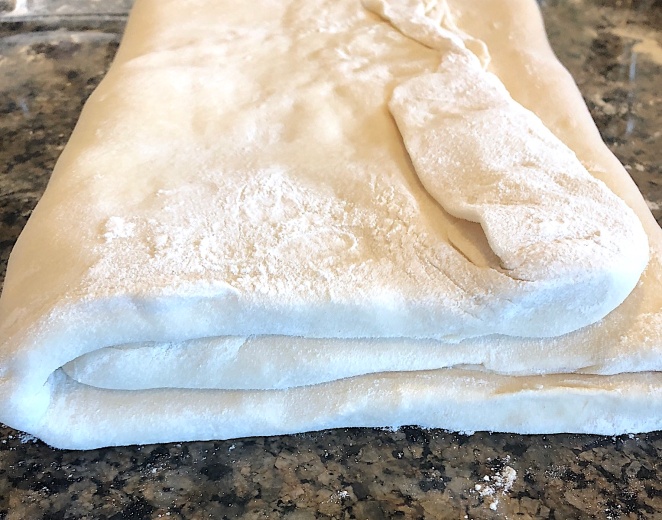 The dough after three turns, and before going into the fridge for the second long rest.

The dough was rolled out again, this time 8 in X 20 in. Cut the dough in half lengthwise, then again three times to make 8 4in X 5in squares. Cut each square diagonally to make 16 triangles. 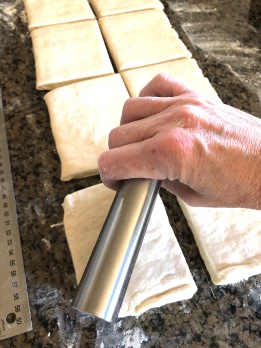 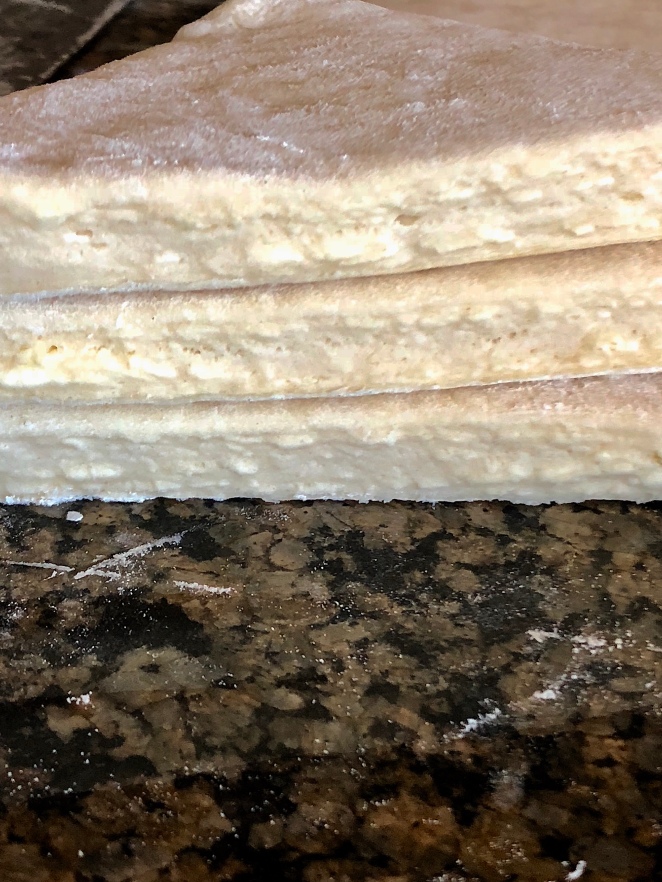 check out the layers!

Gently stretch out the triangles to make the base more centered and the triangle a little longer. Make a small cut at the base of the triangle to make it easier to roll up. Curve the final form into a crescent shape. Let them sit at room temp for 30 minutes to being the final proof. Finish proofing in the fridge for 1 to 3 hours, you want them cold going into the oven. I left mine for 1 hour.

Brush with an egg wash and bake at 400F until golden brown. That was about 30 minutes in my oven 😊 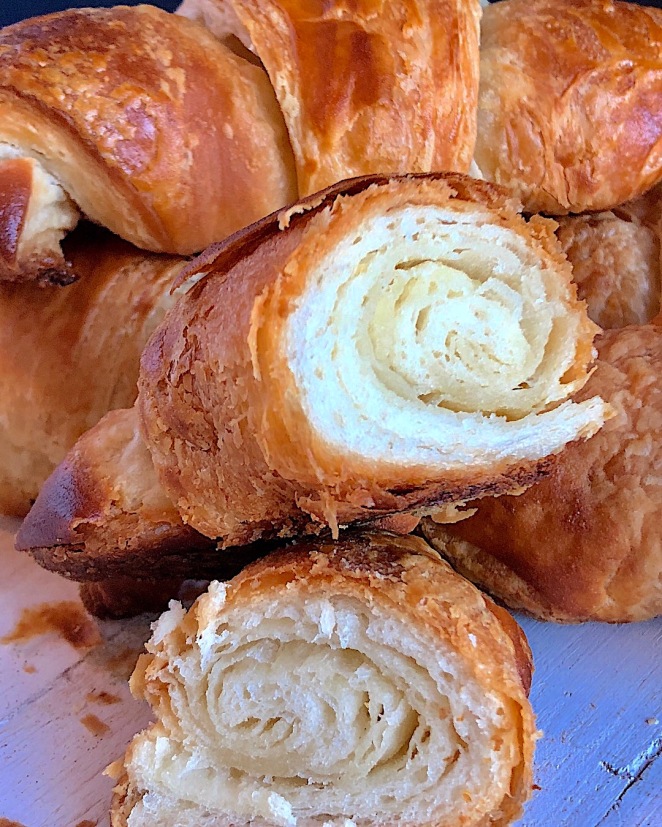 The verdict? They were delicious 🤤 😋 I will be honest, I am not a croissant person and really don’t enjoy eating such a buttery bread. I know I am not “normal” where these are concerned. But I did try one to assess flakiness and taste. I was impressed with Sally’s technique! It was easier than the regular laminated dough process, but does take more time. Breaking it up over a couple days did make it simpler. And, Sally gives some great tips for freezing or making ahead to aid in your planning.

If you have ever wanted to try making croissants but felt intimidated by the process then give this a try! It really is simple, and my family loved them😊💕

Repost from @camille.marguerite
Repost from @4run2
Looking for a unique way to stay in shape - Porta-Hang @portahang , the portable hangboard you can take anywhere! Use it on the road or in your apartment to keep those hands strong.
Repost from @erinleecraft
Repost from @tanmel
Repost from @katieberinger
Loading Comments...